Promoted by Bergamo Film Meeting and the Municipality of Bergamo, the exhibition will be a journey through a priceless collection of original costumes created for the films Amadeus and Valmont by Academy Award-winning designer Theodor Pištěk.
The exhibition was also possible thanks to the collaboration with the Czech Centre of Milan, University of Bergamo, CAV – Centro Arti Visive, Tirelli Costumi, Fondazione Tirelli Trappetti, GAMeC – Galleria d’Arte Moderna e Contemporanea di Bergamo.

For every costume designer failure is always around the corner, since creating film costumes doesn’t simply mean dressing up an actor as much as grasping the essence of the character played by an actor and translating it into fabric and textiles. A meticulous work that requires, from the costume designer, a thorough psychological research on the subject. In addition to that there is also a second kind of research involved, of the philological kind, that allows the designer to explore the historical and cultural context in which a film is set. A great responsibility, that contributes to the success of a film not less significantly than the work of its director, cinematographer and set designer.
The central role of the costume designer in the success of a film is perfectly embodied by Theodor Pištěk, Czechoslovakian with a background in visual art more than cinema. Landed on a set almost by accident, he has never hidden his difficulties in adjusting to the role of film costume designer, a role which he called a “job” that limits and constrains his artistic freedom by putting him at the service of a movie subject. In an interview to the Washington Post, without mincing his words he blatantly declared he never wanted to be a costume designer because it deprived him of the time that he instead wanted to devote to his painting.
It was Miloš Forman who managed to convince him, not once but twice, hiring him in two legendary productions: Amadeus (1984) and Valmont (1989).

Today, thanks to Bergamo Film Meeting and the Municipality of Bergamo, in collaboration with the Czech Centre of Milan, Tirelli Costumi, the Tirelli Trappetti foundation and the patronage of the University of Bergamo, the University Centre of Visual Arts has curated the exhibition of six costumes from the film Amadeus and five from Valmont; all costumes are original and unique pieces sewn by the Sartoria Tirelli of Rome and kept by the Tirelli Trappetti foundation, a true excellence in the field of set costume design.
Curated by Professor Massimiliano Capella, teacher of History of Fashion Design for the curriculum “Fashion, Art, Design, Visual culture” – in collaboration with Elisabetta de Toni and Clara Pellegris – the exhibition will be set up in the Foyer Gavazzeni of the Teatro Donizetti on the occasion of the retrospective dedicated to Miloš Forman by Bergamo Film Meeting 35th edition; on display, among other things, several sketches by Theodor Pištěk, stills and set photos and a montage of sequences from both films. For a few days, the Foyer Gavazzeni of Teatro Donizetti will come alive with the pomp and luxury of the 18th century costumes designed by Pištěk for the two cinematic masterpieces by Forman; the exhibition display is conceived by Massimo Marcomini, also offering a guide service curated by the students of the first year of the “Fashion, Art, Design, Visual culture” curriculum of the Literature, Philosophy and Communication department of the University of Bergamo.
The exhibition celebrates the artistic affinity between Pištěk and Forman (both of Czech nationality), as well as their partnership, which has certainly left a mark in the history of film costume and has brought international recognition to Pištěk’s talent. Both films were in fact awarded with the two most coveted prizes for the “Best costumes” category: the Academy Award for Costume Design and the César des meilleurs costumes.
Despite not being born under a lucky star – “nobody wanted to produce a period piece about a composer”, as Pištěk said later – the film was a huge blockbuster and is now ranked 53rd among the 100 best US films of all time. And Pištěk deserves some of the credit too. Strong of a solid background in art history, and inspired by the 18th century paintings by Jean-Honoré Fragonard and Jean Antoine Watteau, he dressed main characters and extras managing to recreate the sophisticated atmosphere, the culture and the debauchery of the Viennese theatres where Mozart operated. Soft pastel colours, daring necklines, fluffy powdered wigs, bulky paniers, brass tails and damask waistcoats take the viewer back in time, to Mozart’s beautiful Rococo world. A world not easy to reproduce, and the result of intense and dedicated work which required almost a whole year of research in Vienna and Salzburg, constantly looking for stimuli and suggestions. His hometown of Prague, with its buildings and architecture, was a great place to start. But it wasn’t enough. The frivolous and worldly 18th century Venice has also provided a lot of material and food for thought in terms of style and fashion, and  Pištěk’s Italian assistant threw himself headlong in a frantic research for original pieces: jewels, laces, ribbons and fluttering laces that would make the costumes look as realistic as possible (although, according to Pištěk, the true highlight of all his creations were headdresses).
Of the approximately seven hundred costumes that appeared on the set, only a hundred have been made from scratch from a sketch by Pištěk, while the others were borrowed from the major European outfitters.
One more reason to admire this precious small exhibition that is undoubtedly worth a detour at Teatro Donizetti.

One last note: those who won’t be able to visit the exhibition can always catch a flight to Prague and head to Hradčany Square: there, the guards of the Castle parade every day wearing elegant blue livery designed by none other than Theodor Pištěk. 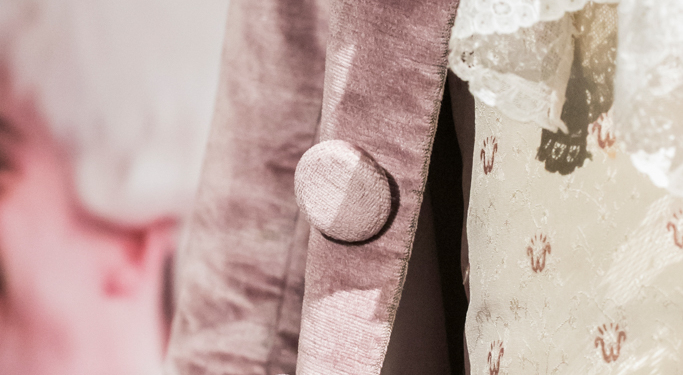 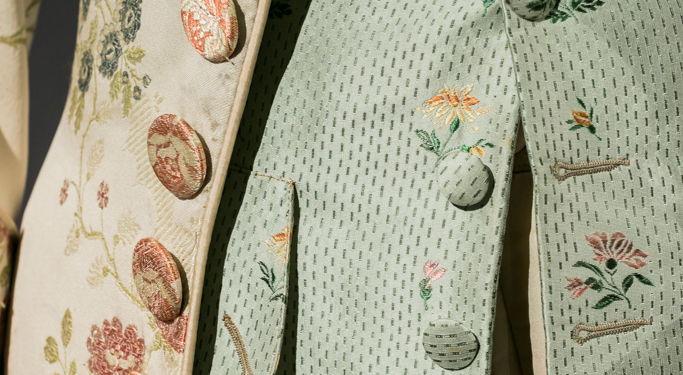 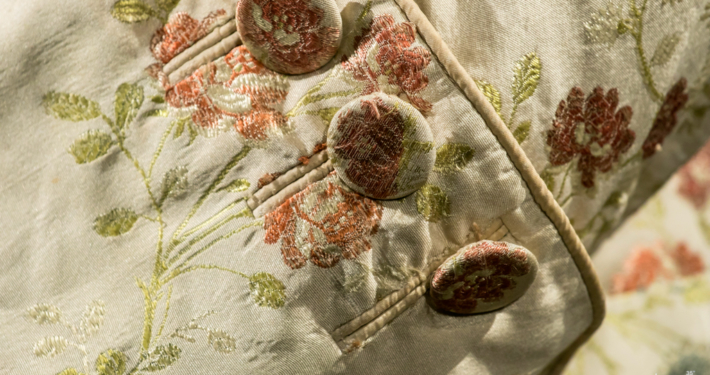 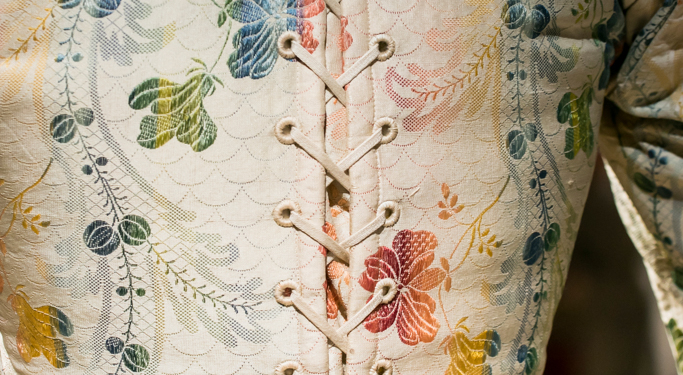 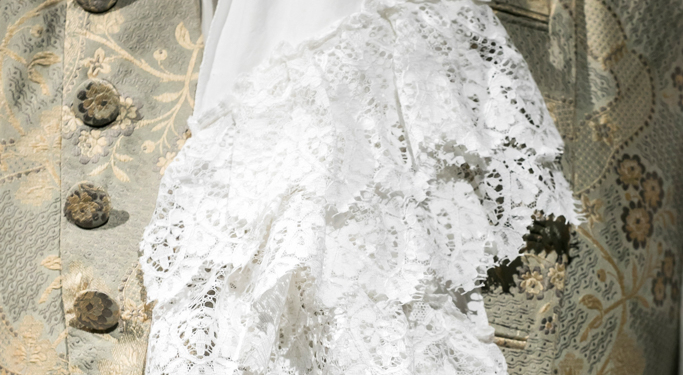 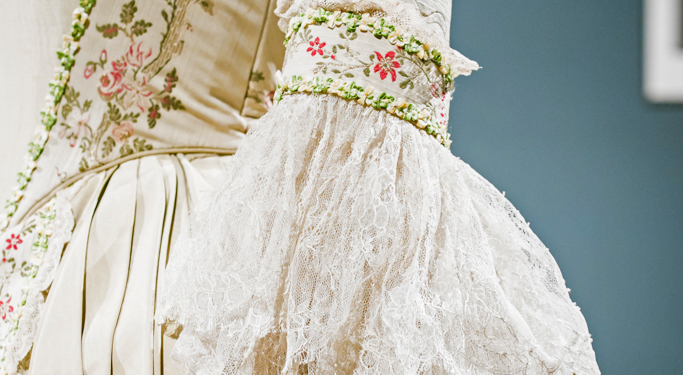 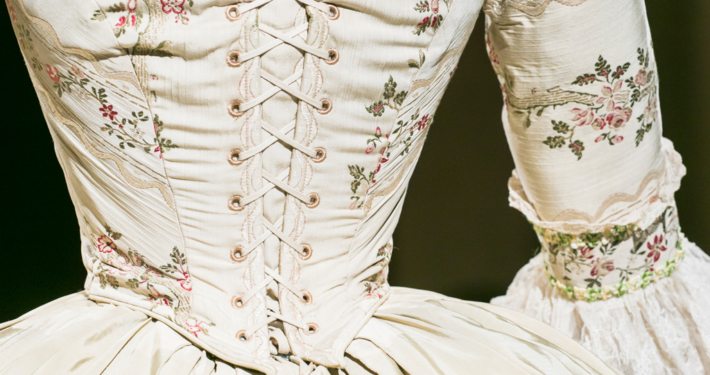 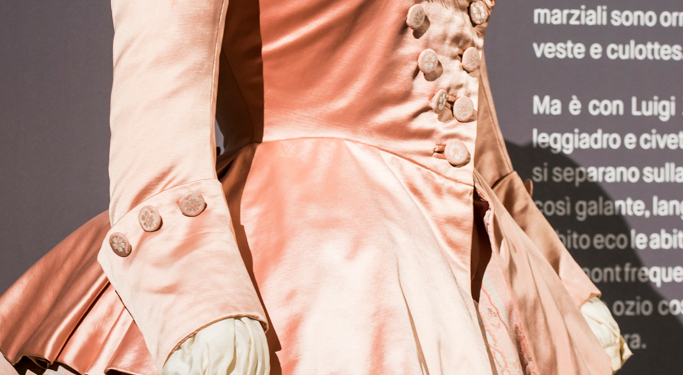 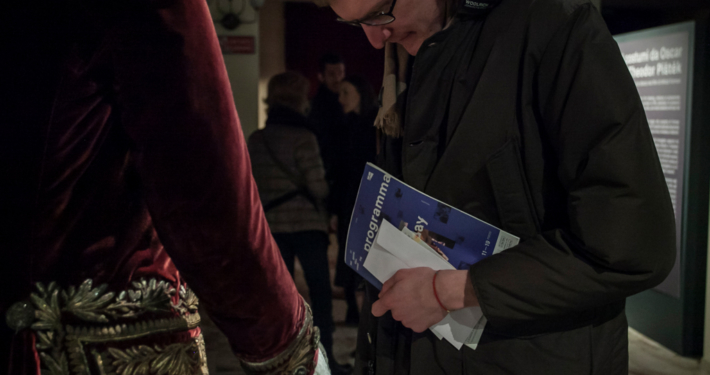 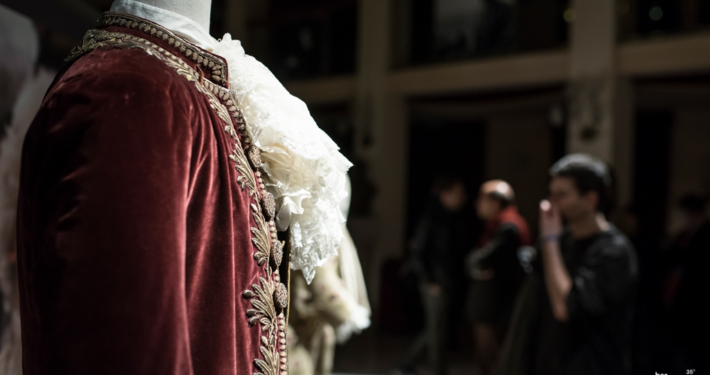 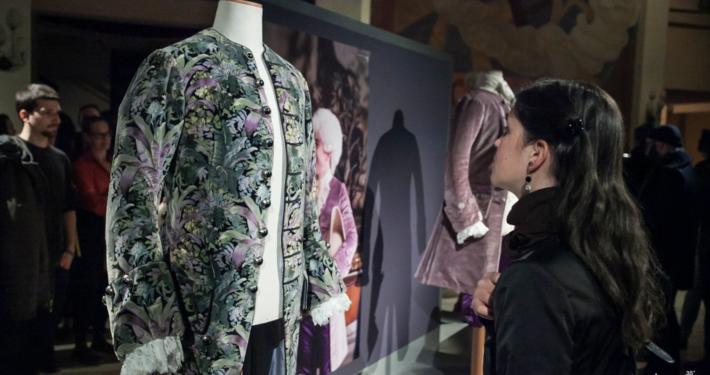 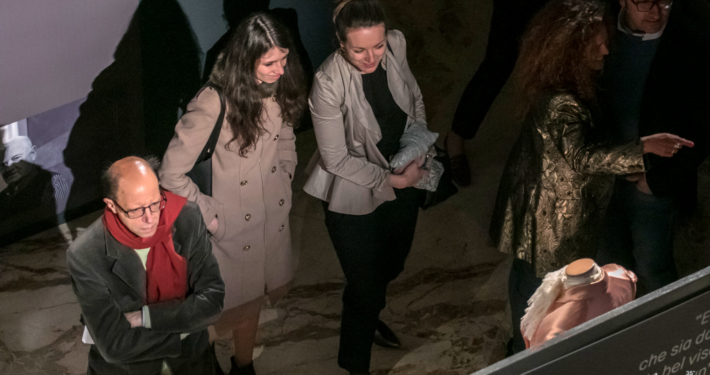 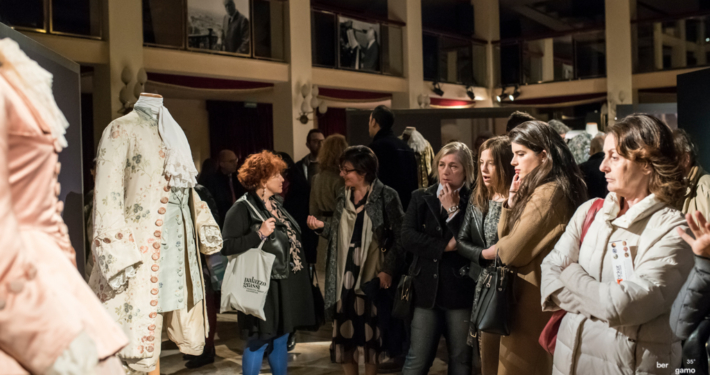 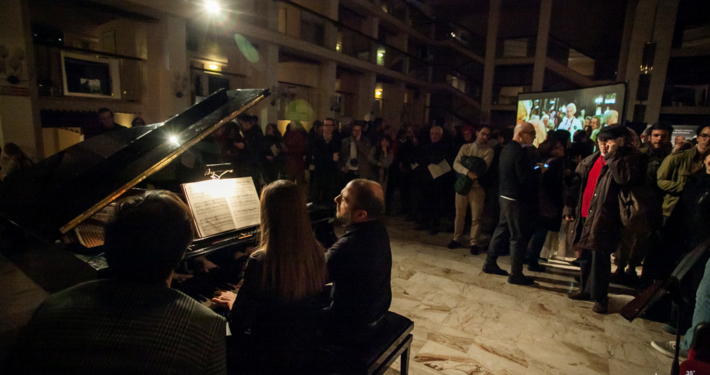 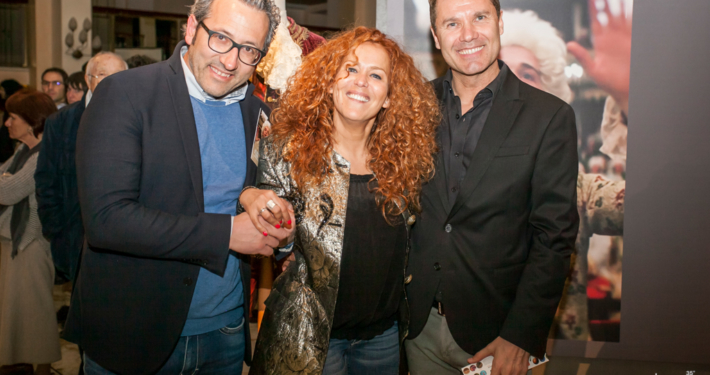 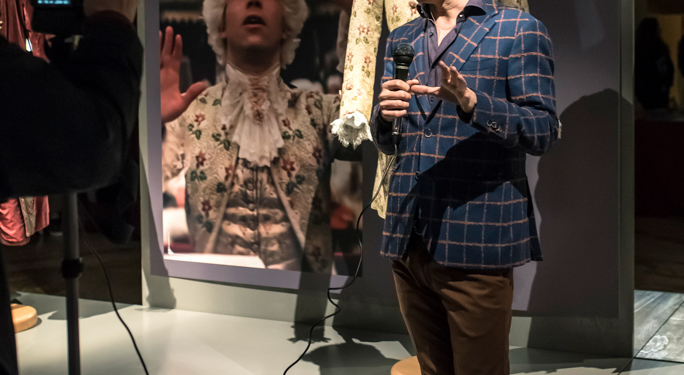 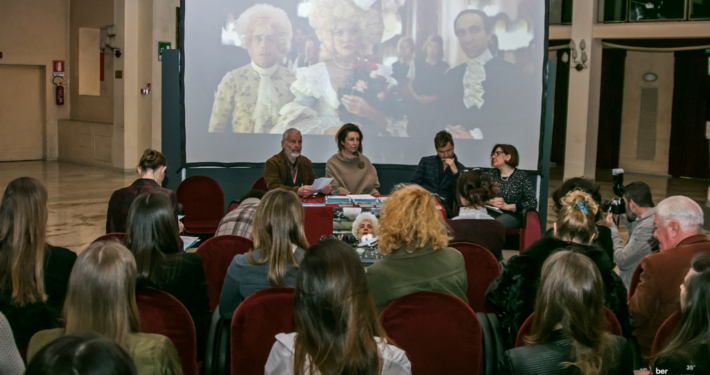 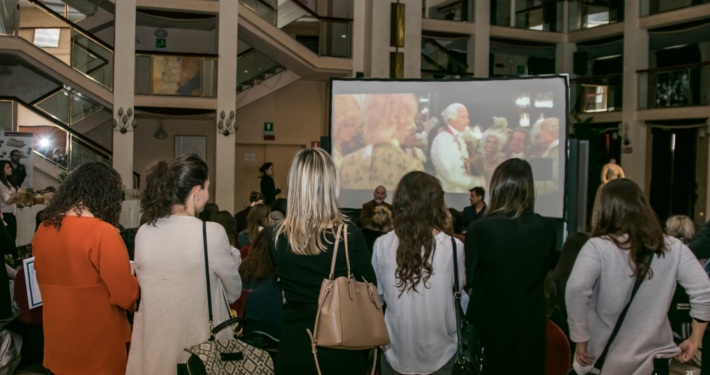 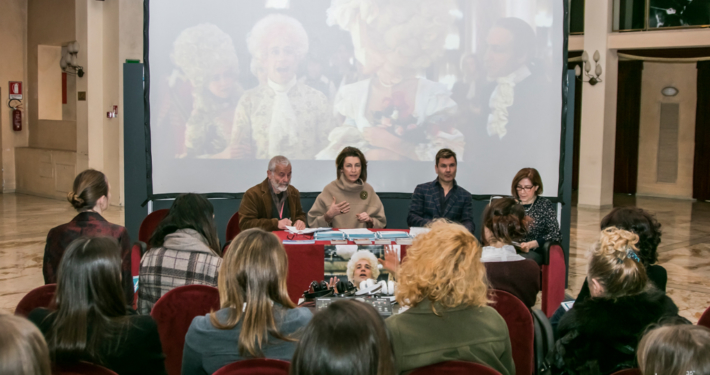 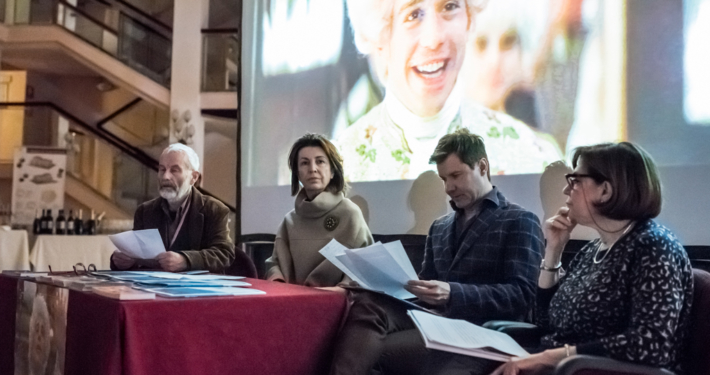 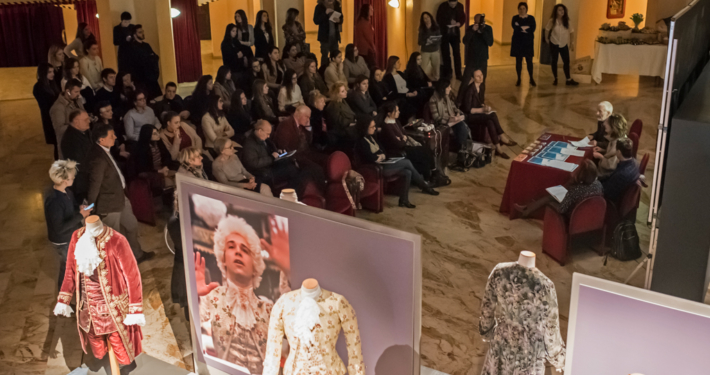 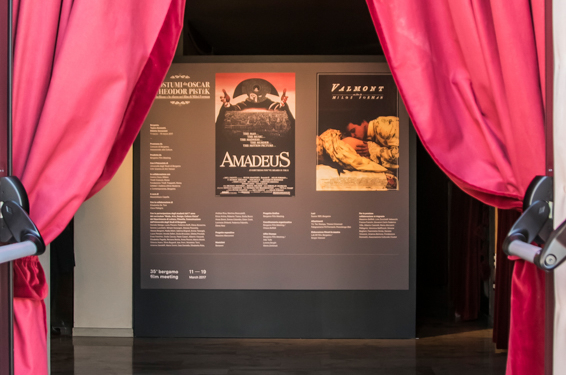 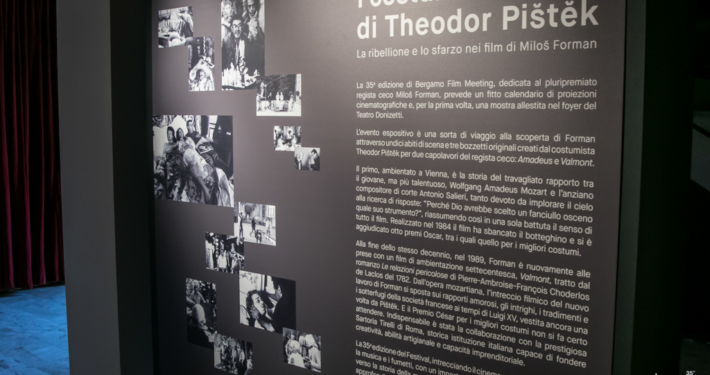 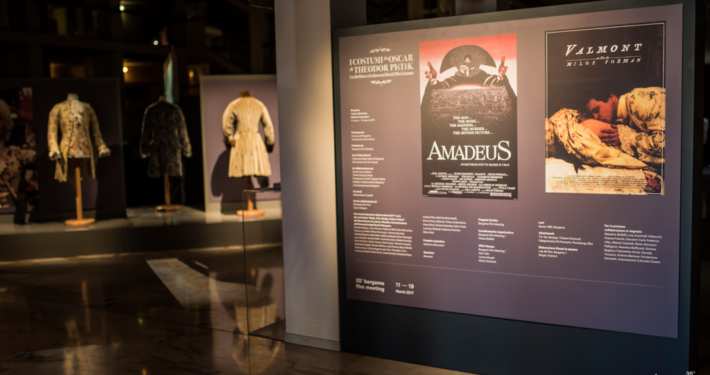 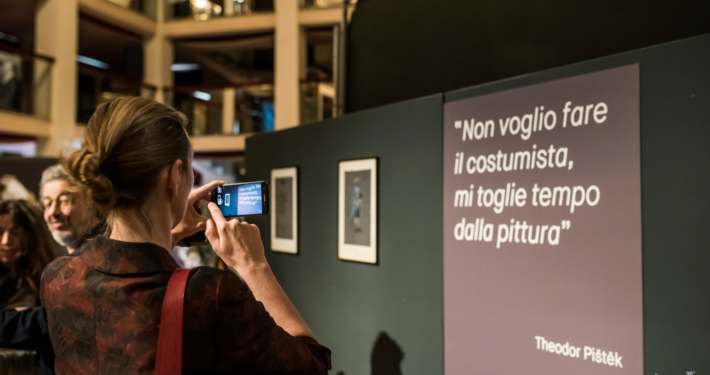 GUIDED TOURS
Guided tours to the exhibition are provided by the students of the first year of the “Fashion, Art, Design, Visual Culture” curriculum of the Department of Literature, Philosophy, Communication of the University of Bergamo.
Guided tours are available on the following days:
Saturday March 11, Sunday March 12, Saturday March 18 and Sunday March 19
duration: 30 minutes each, starting from 3:00 to 6:00 PM
reservations: [email protected]

SPECIAL EVENT GAMeCinema
The collaboration with GAMeCinema this year has also resulted in a special screening event of the film Motsart i Sal’eri(Mozart and Salieri, URSS/Latvia, 1962) by Vladimir Gorikker, from the Nino Zucchelli Film Fund. A faithful transposition of the opera by Rimsky-Korsakov (1897) derived from Aleksandr Pushkin’s drama (published in the collection Little tragedies, 1830), with vocal parts from the original libretto, the film is a true gem for Opera lovers but also an opportunity to plunge into the atmosphere of the period in the stylish environment recreated by the costume exhibition. Never released in Italy, the film was presented at the Fifth Gran Premio Bergamo (1962) in the section Le arti al cinema – Musica (The arts in cinema – Music).

Friday, March 17 6:30 PM | Bergamo, Foyer Gavazzeni of Teatro Donizetti
Screening of: Motsart i Sal’eri/Mozart and Salieri
Vladimir Gorikker, USSR, Latvia 1962, 44 bn, o.v. sub. it.
Salieri, who devoted his whole life to music and earned success at the price of self-denial and toil, is envious of Mozart’s effortless genius for whom artistic creation is a little more than a game. Blinded by jealousy, Salieri decides to kill Mozart. The legend of Mozart’s poisoning here becomes an opportunity to meditate on the nature of artistic creation, introducing with brilliantly terse dialogues, the theme of the rebellion against God. «Genius and crime are indeed two incompatible things».
Free entry