The 37th edition of Bergamo Film Meeting will take place from March 9 to 17 2019, and will be officially opened on Friday March 8, 8:30 PM at Ex-Chiesa di Sant’Agostino, with the memorable project of the Usa dj Jeff Mills: a new soundtrack for Metropolis, the silent masterpiece by Fritz Lang (1926).

The Festival program includes 7 feature films, national Italian première, in the Competition-Exhibition; 15 documentaries in the Close up competitive section; the retrospective dedicated to Jean-Pierre Léaud, the most famous actor of French Nouvelle vague; the Italian preview of the complete retrospective dedicated to Karpo Godina, one of the most representative figure of the Yugoslav and Slovenian cinema; the section EUROPE, NOW!, featuring the complete works of two contemporary European filmmakers:Bent Hamer (Norway) and Alberto Rodríguez (Spain); the homage to the Scottish director and actor Peter Mullan; the photo exhibition Pasolini and the Arabian Nights with photographs of Roberto Villa on the set of Il fiore delle Mille e una notte (Arabian Nights, 1974); the section dedicated to the contaminations between cinema and contemporary art that offer a close-up look on the work of Nathalie Djurberg and Hans Berg; a focus on animation cinema featuring Polish director Mariusz Wilczyński; the launching event ofBergamo Jazz; the cult movies of GAMeC Cinema, the restored classics, the previews, the Fantamaratona, the Kino Club, for the younger audience, and the Daily Strip, the Festival event dedicated to comics that this year will host four of the best Italian illustrators: Alessandro Baronciani, Loputyn, Squaz and SerT. 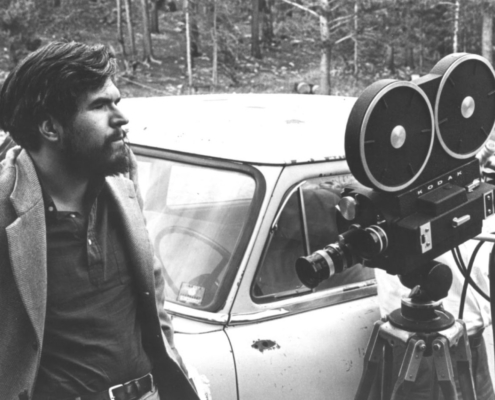 Inside the 38th edition of Bergamo Film Meeting (March 7 - 15, 2020), within the section Encounters - Cinema and Contemporary Art, will be presented an exhibition dedicated to Stan Brakhage, one of the most influential avant-garde filmmakers of the twentieth century. https://www.bergamofilmmeeting.it/bfm/wp-content/uploads/2020/02/BRAKHAGE_CAR1.jpg 935 1500 Bergamo Film Meeting https://www.bergamofilmmeeting.it/bfm/wp-content/uploads/2019/08/logo_bfm.gif Bergamo Film Meeting2020-02-19 15:38:542020-02-20 17:24:41Stan Brakhage - An Adventure of Perception
07 March
15 March

On the occasion of the re-release of the film in a restored version, Bergamo Film Meeting presents for the first time in Italy an exhibition featuring paintings, drawings and work materials of the first feature film by Jean-François Laguionie, Gwen, le livre de sable. https://www.bergamofilmmeeting.it/bfm/wp-content/uploads/2020/01/Gwen_03-1.jpg 996 1500 Bergamo Film Meeting https://www.bergamofilmmeeting.it/bfm/wp-content/uploads/2019/08/logo_bfm.gif Bergamo Film Meeting2020-01-15 13:05:172020-01-15 19:15:21Gwen, or The Book of Sand
09 March
17 March

A poet, writer and director considered one of the greatest Italian intellectuals of the twentieth century, Pier Paolo Pasolini will be the protagonist of this festival event consisting of a photo exhibition, a panel discussion and the screening of three restored films https://www.bergamofilmmeeting.it/bfm/wp-content/uploads/2019/03/234-CFRV_03_14.19-ok.jpg 994 1500 Bergamo Film Meeting https://www.bergamofilmmeeting.it/bfm/wp-content/uploads/2019/08/logo_bfm.gif Bergamo Film Meeting2019-03-08 16:54:502019-08-20 16:22:38Pasolini and The Arabian Nights